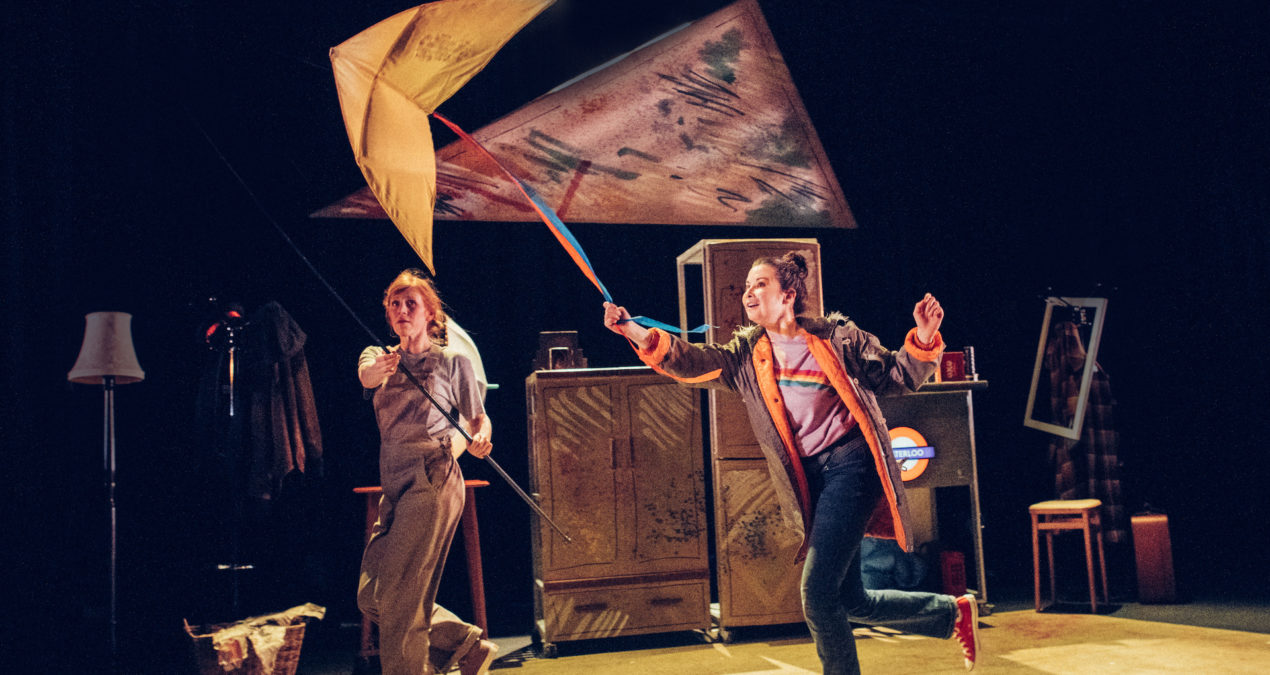 When I heard about The Wrong Crowd‘s production Kite, I loved the idea of a theatre show for children without words. Some of my favourite productions I’ve seen aimed at younger audiences have had little language – so I know the idea works well. Sadly, Pickle and I weren’t able to attend this particular run at Warwick Arts Centre, but my two foster brothers and my Dad were. They joined a varied audience ranging upwards from about four years old on Monday 18 February, and I caught up with them afterwards to hear all about it.

My foster brothers are aged twelve and ten, and it sounds like they were completely won over by the performance. In typical pre-teen grumpiness, the youngest wasn’t sure what to expect and trudged into the Arts Centre determined that he wasn’t going to like it… but when I spoke to him about it afterwards, you’d have never have guessed he had any kind of reservations!

What is the play about?

Stuck in her Grandma’s obsessively tidy flat, a recently orphaned girl discovers a kite which comes to life and takes her on a wild adventure. Little does she know that Grandma has her own brand of magic and the wind will bring them together in ways they never would have imagined.

The boys followed the story of the play perfectly, understanding that the girl had lost her parents and that she didn’t see eye-to-eye with her Grandma. As children in care, I wonder if perhaps they understood some of the emotions associated with living apart from your parents more than an average child would. Without using words, the production uses music, movement, puppets and clever multi-functional props to tell this story, appealing to young as well as older audiences in it’s creativity and ingenuity.

What did they make of it?

As is often the way with theatre, the way the boys spoke about the production, it was obvious it spoke to them in different ways, appealing to them based on different levels and reflecting their own interests. The eldest animatedly told me about all the transport in the play: ‘they went on a train, and on a bus and then on the Tube’, explaining how they used clever techniques to turn the stage into all of those transports and show distances traveled.

The youngest was fascinated by little details – he told me that they saw the Queen plucking her eyebrows(!) and he couldn’t get his head around how the audience could hear the music playing even when the girl had her headphones in. From the things he told me, I could tell he was really interested in how the production was put together – wanting to understand how it worked and how they created the onstage magic. He loved the use of different sizes dolls and kites to create distance and perspective.

All three of them spoke very highly of the production, amazed at how something without words could tell a story so vividly. They were impressed, and I think they all enjoyed it more than they were expecting given what they knew about it beforehand.

Catch it on Tour

Kite has only just started it’s Spring 2019 tour, so if you weren’t able to catch hit at Warwick Arts Centre, here’s where it’s heading next:

Would the boys recommend?

Absolutely! Although, the eldest wanted to caveat his recommendation by specifying: ‘it wouldn’t be very good for blind people, but very good for deaf people.’

To end my review, I’ll leave you with the things the youngest said were the lessons lessons learned from watching:

Combating the ‘Attention Economy’ with the Outdoors