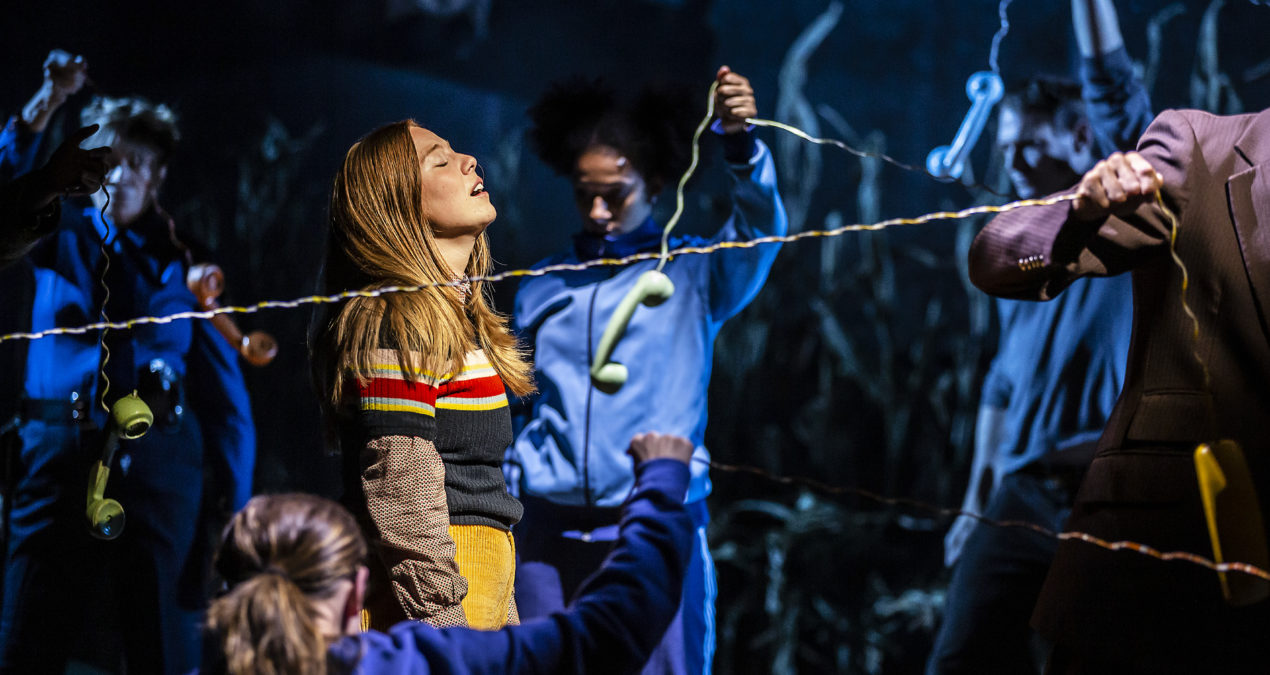 You may have read the bestselling novel, or seen the film directed by Peter Jackson, but now you have another chance to see The Lovely Bones on stage as it returns to Birmingham Repertory Theatre before embarking on a UK tour following a hugely successful debut last year. Directed by Melly Still with incredible set design by Ana Inés Jabares-Pita, it tells the story of 14 year old Susie Salmon who’s a very normal teenage girl in Pennsylvania with a crush, a questionable wardrobe and Biology homework. That is, until she’s not. On 6th December 1973, she is raped and murdered by a neighbour.

For a story that deals with some incredibly dark and complex issues, this production is far from morbid. Just as life is juxtaposed with death, so is comedy with trauma. Whilst there were moments when I felt my heart ache with sadness, there were also many more moments of laughter, smiles of recognition and warmth. Above all, it was impossible to resist being charmed by Susie’s spirited enthusiasm and passion.

It has to be said, Charlotte Beaumont’s performance as Susie is as captivating as it is brilliant. She sets the tone for the whole production beautifully, and carries the story with confidence, energy and charm. Jack Sandle gives a harrowing performance of a father crippled and taunted by grief and I was particularly drawn to Leigh Lothian’s Buckley – who, to me, felt almost more of a victim than Susie. The often overlooked grief of a sibling (an issue close to my heart) – who loses more than just a sister – is very cleverly portrayed here.

Yes, this play is about grief (we, quite literally, explore it from all angles), and how lives can get ripped into shreds by it. But it’s also about the long, slow building process. It acknowledges that grief is always there, even in the “happiest” of moments and that fixing broken things can be a lifetime project. Incredibly, it is a very hopeful play. It is uplifting, it is funny and it dazzles with it’s clever staging and 70s soundtrack.

The novel’s author Alice Sebold talks about wanting to give ‘this voiceless mass’ of female victims a voice, especially following her own experience of trauma having been raped and beaten when walking home as a student. And Bryony Lavery’s adaptation has more than done justice to that intention. She brings Susie’s voice to the stage, breathing new refreshing life into this story like it was always intended to be told this way.

“All those girls who never had a voice because they died, unlike myself.”

When I was a student, I kept a notebook of the theatre productions that inspired me the most. I’d scribble down set designs, casting choices, pieces of costume and the delivery of lines that stuck with me. This production of The Lovely Bones makes me want to pick up that notebook again. I’d note down all the ways Melly Still merged worlds and dimensions, I’d try to capture the clever sight lines and hypothesise how different effects were achieved (gauze, mirrors, projections… who knows!). This production is inspiring – not only on a technical level, but in its deftness in dealing so beautifully with some horrifically dark and complex issues in an ultimately uplifting and positive way.

If you can’t catch this production in Birmingham, here are it’s future touring dates:

Disclaimer: I attended the press performance of The Lovely Bones on Tuesday 10 September 2019.

Why Go Camping with a Toddler?