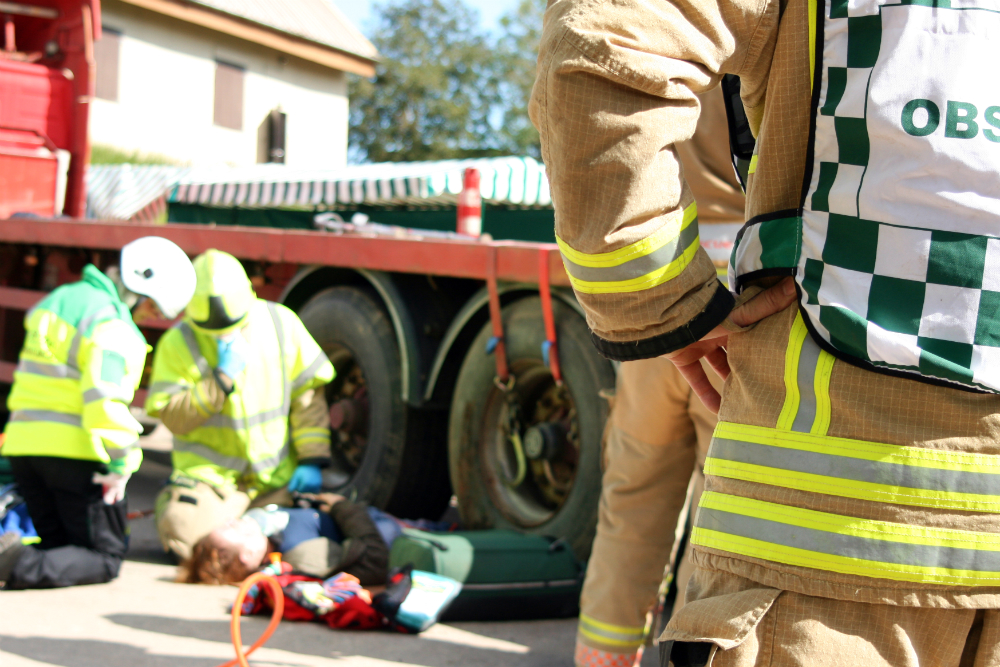 Somewhere in the middle of the Welsh countryside, nestled in the Brecon Beacons, is a strange eerie uninhabited village. Its buildings have no windows, and are boarded up with metal sheets and every now and then, the sound of gunfire can be heard in the distance. Its called Sennybridge, a purpose-built training village for the Army and, on 16th September, it was the scene of a mass-casualty training event for the Hereford & Worcester, and Mid & West Wales Fire & Rescue Services. After being roped in by my friend Katie, I went along as a volunteer to do a little bit of role-playing and help make the staged scenario as real as possible for the fire crews responding. It’s a day I don’t think I’ll be forgetting in a hurry.

The scenario was scarily topical, and involved a pedestrian area with several road accidents. When we arrived, there were cars and lorries already in place, and several ‘dead bodies’ (fairly realistic-looking, dressed sacks) of varying sizes and ages were strewn across the scene. As volunteers, it was our role to bring the scene to life. Some were trapped in (or under!) vehicles, most of us played the roles of walking wounded with a few unharmed bystanders, some with first-aid skills.

I was assigned to Micro Scenario 1 as a walking wounded casualty. Our part of the scene involved two collided vehicles, with a poor bloke in one car trapped in-between them by his leg. They pulled out all the stops to make it look as realistic as possible – we were all made up with latex lacerations, and the part of the man with his leg trapped was played by an amputee with a very gruesome looking leg prosthetic complete with a blood squirting mechanism. There was already blood pooling under the cars and running down the street. Around the corner, another two cars had collided with some scaffolding and a man was pinned in his car by a piece of scaffolding pole that had gone right though him. Yeah, gruesome stuff.

I was pretty nervous before it began. I had no idea how to behave, and the fire service kept telling us to scream and be as hysterical as possible – but that’s quite hard and especially to start with, I felt so self-conscious. My brother and I didn’t get off to the best start as before the fire crews arrived, a photographer asked my brother and I to ‘look serious’ for a photo, and I got a serious case of the giggles. But it was much easier once it all began, especially as I decided to take on the role of mother to one of the dead children at the scene. This poor little boy doll was lying lifelessly, dangling from some metal railings which his head was stuck through. The tears and stomach wrenching sobs came quite easily, and I was resolute to not leave my baby.

It’s not like it is in the movies. Things happen slowly. Not because the fire crews know it’s not real but because they have to make a lot of assessments, decisions and assign priorities as well as ensure they conduct themselves in the safest way possible. It felt like we were waiting to be dealt with for ages because even though they were calling for the walking wounded to make their way to a holding area for treatment, I wasn’t budging from being with the baby-sack. Every now and then, I looked up to take a look around, wondering if perhaps I should just make things easier and leave the baby behind, but one of the Fire Service Observers (mainly firefighters who are there to observe and make sure the Fire Crews do the right thing as well as ensuring safety – the scenario may not be ‘real’ but the cutting of car roofs and smashing of windscreens can have pretty serious consequences if not done correctly) came over and told me to keep going. Eventually, it was my turn to be seen, and someone from the Fire & Rescue team bandaged up my injuries after releasing my baby from the railings. I just held onto that sack doll. Clung to it as if my warmth would bring it back to life.

Seeing the Fire Crews do their jobs is fascinating. It’s only at an event like this where I feel you can really objectively appreciate and fully acknowledge the job they do. It’s not dramatised like it is on TV. You’re not in a state of real fear or in immediate danger. You can take a look around and see exactly what’s involved in dealing with a crisis like this. It’s the kind of scene you wouldn’t wish anyone to experience, yet these amazing men and women choose to. I can’t imagine that level of responsibility and critical decision making. How anyone could arrive at a scene like that and be able to make rational decisions about prioritising care, treatment and rescue is beyond me. It’s genuinely awe-inspiring. And it’s worth volunteering to be able to witness and appreciate that.

I wouldn’t have known about this volunteering opportunity if it wasn’t for my friend Katie, so I’m determined to help spread the word about it because I genuinely think it’s something everybody should experience. Whether you fancy yourself as an actor or not, this truly is one of those occasions where it IS all about the taking part. I wish we lived in a world where we didn’t have to prepare our Fire & Rescue Services for these kinds of scenarios, but the sad thing is – we do. And so preparing the brave men and women who put themselves right in the middle of such atrocities is so very important.

Why not have a look at your local fire services’ website? They may have a section on volunteering and it’s definitely worth dropping them an email to see if you can be added to any mailing lists or put your name down for any future training scenarios. If you’re in the Hereford and Worcester area, check out their Volunteering page or drop an email to volunteer@hwfire.org.uk. Help them, to help us. It won’t be a day wasted.

How should a toddler behave at a Restaurant?

Fitness, Get Outside, Lifestyle

5 of the Best Running Events in the West Midlands