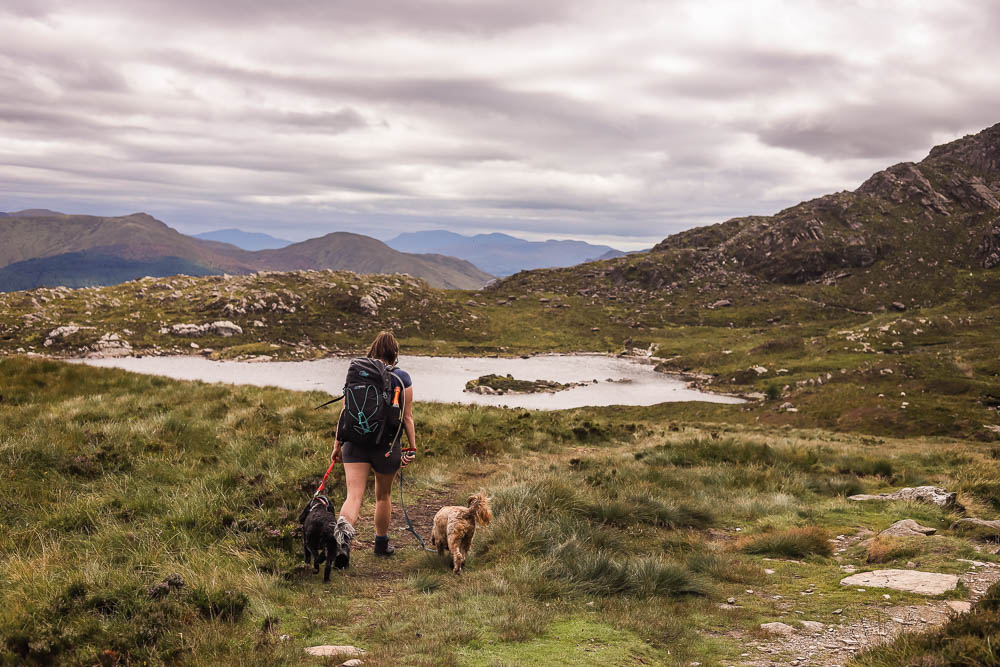 Over the last weekend in July, I had the absolute privilege of hiking Moel Siabod with Bryony (@hike_this_way) and help her celebrate her final Nuttall in both England and Wales. The magnitude of this achievement should not be underestimated. Moel Siabod was her 446th mountain, and it’s an adventure that has taken her 7 years to complete. The dedication required for such a task is phenomenal and emotions were high atop that final summit. Rightly so! It was a fantastic day, and it meant the world to me that I was able to be there. And the cherry on the top? It was also my first proper mountain scramble. Exciting all round.

Contents hide
1. So, what are the Nuttalls?
2. Our Moel Siabod Route
3. The Daear Dhu Scramble
4. Bryony’s Final Summit
5. Heading Down

Bryony and I first met when she very generously allowed my Mom and I to tag along when she hiked Mynydd Mawr. It was a soaking wet day and lots of laughs were had, followed by tea and cake in the holiday home we were staying in at the time. I’d gone all out and hired a camera lens to test out for that Welsh holiday, and my overall memory from that walk is being so determined not to fall over and risk breaking the super expensive camera equipment I’d rightly or wrongly lugged with me. It was all good though, and I captured some of my favourite mountain photos to boot.

So, what are the Nuttalls?

The Nuttalls are all the mountains within England and Wales with a height of over 2,000ft (or 609.6m). The classification was created by husband-and-wife team Anne and John Nuttall who wonderfully keep a ‘completers’ list on their website. Their two publications (Mountains of England and Wales: Vol 1* and Vol 2*) are invaluable sources of information for any hikers wanting to follow in their footsteps. There are 257 Nuttalls in England and 189 in Wales – together making 446 mountains to scale if you’d like to join the hallowed ranks of those amazing adventurers that have bagged them all.

As someone who is relatively new to mountain hiking and with relatively little and sporadic experience, being in the company of so many accomplished walkers was a treat in itself. What this group doesn’t know about navigation, hills and long distance walking paths is, quite frankly, not worth knowing. On the drive down, I wasn’t sure what to expect from Moel Siabod, but I hoped I’d hold my own.

The map above shows our route up (on the right hand side) and the route down (left hand side). The route up was simply beautiful. What is it about walking past a body of water in the mountains? Nothing beats it. I mean… the photos speak for themselves! You can’t really go wrong in the Snowdonia National Park, can you?

We ascended the mountain via the Daear Dhu ridge which involved a bit of a scramble. Having not done much scrambling before, it was both terrifying and absolutely bloody brilliant. I’m not the best with heights (or more accurately, I have fear of falling) so when the route becomes a bit more precarious, I go into super concentration mode, determined not to stumble. There were a couple of times I needed a leg up (or, should that be a ‘bum’ up!) but most of the taller lads with us didn’t appear to have much problem at all – in fact, they were able to multitask (shock horror!) whilst it really took all I had to ensure I didn’t go arse over tit back down the mountain. It was the kind of route that when you’re looking up, you wonder how on earth you’re going to manage it, but then you wouldn’t even think of going an ‘easier’ route because the slight challenge was too delicious an opportunity!

It didn’t help that I was running on empty, having not had time for a proper breakfast before driving down. By the time we hit the summit, I was really feeling the effects of that missed meal but nothing downing a sandwich didn’t fix. Phew.

Once we reached the summit, it was time to celebrate our main girl Bryony and honour all she’s achieved. It was EMOTIONAL. A tunnel of hiking poles lined her route to the summit (once we’d kindly asked the marshals for the Craft Snowman Duathalon to leave their post momentarily) and we cheered, whooped and filmed/photographed every moment. There was fizz. So much fizz. And celebratory champagne sprays. And, of course, Bryony’s obligatory number photo. And, of course, rocking the Acai Outdoorwear.

I can’t even really describe how proud of her I am. God knows how she must have felt, but I am in complete awe. Looking out across the mountainous view, peaks and valleys littering the skyline and the sky stretching out above us, it was just magical. It was jubilant. And rightly so. Many in the group of hikers had completed the same accomplishment or were working towards it themselves, so the magnitude of it all wasn’t lost on anyone.

I have to confess I was mightily relieved when Bryony decided to take the gentler route back down. I coped with the scramble on the way up, but I would have been absolutely terrified to have climbed down the same way. I happily chatted away (it’s amazing what you learn about new people when you’re walking with them for the first time), and I really enjoyed hearing how different people had become friends with Bryony over the years.

Before I knew it, we were back at the car park where we’d all started and it was time for the drive back home. I genuinely don’t think there are many feelings that beat that post-mountain or post-long walk feeling. I drove home feeling that satisfying warmth in your body from exercise, my skin felt tight from the wind and kissed by the sun, and I happily reminisced about the gorgeous sights and sounds of Moel Siabod.

But most of all, I left feeling so priviledged to have been there, and to have witnessed such an achievement. Bryony, you are a wonder. You are brave, strong, vibrant and an absolute joy to be in the company of. What’s next?

Combating the ‘Attention Economy’ with the Outdoors

Days Out, Family Life, Get Outside, Lifestyle

A Summer of Spectacular Shows at Warwick Castle

Family Life, Get Outside

Gardening through the Seasons with Rattan Direct