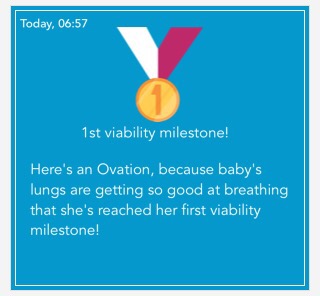 It’s a bit belated, especially as I’m well into Week 25 now, but I’ve eventually gotten around to writing a 24 weeks update. As you may have been able to tell from the tone of my blog posts over the last week – it’s been a challenging one for me this week. I must be having a surge of hormones because everything just seems to be tough for me to deal with, but I’m so happy to have reached this stage as many people had told me at 24 weeks, a baby becomes viable if it were to be born. So from here on out, Pickle is just going to get stronger and stronger which is very comforting.

I’ve been trying to do all I can to cheer myself up and de-stress a little, which perhaps somewhat vainly, means making a bit of an effort with my appearance (cue a series of new selfies taken on my phone that I can refer to next time I’m feeling gross and unattractive). You can read a little about how I’ve been feeling here: ‘Don’t be silly, sweet. You look beautiful.’  Also eating a few naughty sweet treats and doing a bit of cross-stitch has helped improve my mood! 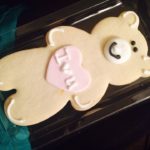 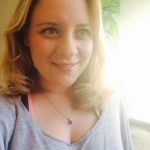 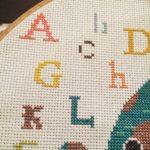 Cross-stitch always calms me down… except when I get a tangle in my thread!

We also spent a REALLY lovely afternoon having cuddles with our niece. She’s only three months but honestly, you’d have thought she was much older! She’s already confidently holding up her own head, and rolling over. She’s so tall already, and it’s just glorious to see her smiling face.

I haven’t taken many bump photos, so took the opportunity to try and take one before I tried out a yoga DVD last weekend. I think my bump looks smaller than it feels here!

Pickle is the size of… Oh, I don’t know. I’m a rubbish Mum and I can’t remember. 23 Weeks was a Barbie Doll so if I remember rightly, this week Pickle was GI Joe doll sized. However big that is!

I’m feeling… frumpy and grumpy. And full of cold. It’s not been the best of combinations. I’ve been super grateful for the patience and support LPD has given me – I really don’t deserve it. He constantly asks what he can do for me and that means so much to me. Most of the time, there really isn’t anything he can do – but I have been enjoying the copious amounts of foot rubs he’s been giving me. Mmmm…

I’m craving… everything that’s bad for me. I’m really having to curtail my sugar intake because it’s getting worryingly out of control! Very embarrassingly, I had a midwife appointment on Thursday and she told me I had plus levels of glucose in my urine. She asked me what I had for breakfast, and I sheepishly admitted it was a bowl of Coco Pops. I didn’t admit to the four puddings I’d shared between three people the night before as well (whoops!). I have to go back next week for a repeat urine test.

I’m worrying about… my glucose levels! I’m not at risk for gestational diabetes so it’d be very unlucky if I were to get it but I’m fairly confident the glucose was down to high levels of sugar consumption rather than anything else. Will be very good this week and keep my fingers crossed first thing on Thursday that my levels return to normal.

Oh for the want of a sexy underwear choice!

I’m missing… lingerie! Just wearing NICE underwear. As much as I’m loving the comfort my non-wired bras are providing, they just don’t give you that little sexy boost in the morning, do they? And I’ve been noticing my go-to pants are getting more and more grannified and large. Now, if someone could design a sexy range of maternity underwear, they’d be onto a winner I reckon!

Watching your Husband grow into a Dad