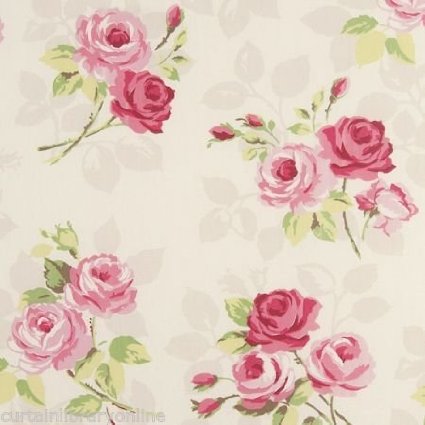 LPM Made This: Envelope Back Cushion Cover

Back in August, whilst Little Pickle’s Dad (LPD) was out on a stag do, I made it my mission to make a cushion cover, following the instructions from my Learn to Sew with Lauren book, written by Lauren Guthrie of Guthrie & Ghani fame and The Great British Sewing Bee.

I’d bought loads of lightweight upholstery fabric online after I’d first learned how to make tote bags so I had a small selection of Clarke & Clarke fabric to choose from at my fingertips and I held each one up against the sofa to decide which one would fit best… This gorgeous light floral print won.

First things first: cutting out my pattern pieces. Lauren’s instructions said to cut a 53cm square for a 20 inch cushion pad, but my cushion pad was more of an 18 inch so I went for a 48cm square to begin with, and then cut two rectangles measuring 48cm x 33cm.

I thought I’d be resourceful and use the HUGE roll of greaseproof paper LPD had left over from a hog roast he did a few weeks ago until I realised it wasn’t quite wide enough. Nevermind, I thought, I’ll just selotape two pieces together to make the full size, not really realising that selotape just DOESN’T stick to greaseproof paper. I almost gave up. And I hadn’t even begun. But I really wanted to make this cushion, so I just pinned the two pieces of paper together and put proper dressmaker’s paper on my shopping list.

A couple of quick hems on the envelope back pieces and it was time to start assembling everything together. Is it just me who really enjoys ironing when it’s for a sewing project? Hate it any other time, but I love pressing my sewing!

Feeling a little bit too confident, I quickly pinned the front and back cushion pieces together and began eagerly sewing them together. One continuous straight stitch all around the outside and I was feeling pretty pleased with myself. Until I noticed I’d sewn the front panel on back to front. Damnit. It’s a good job I’d brought myself a new seam ripper! After swearing at myself profusely, I had a bit of fun ripping the seams open and tried again.

Whoops… that’s the front panel on the wrong way around.

I triple checked everything before sewing for the second time and was soon away. I finished off the seams with a zigzag stitch before turning everything around the right way. Lauren had some great tips in her book for turning the corners out properly and I was really impressed with how crisp they were! Bonus.

A neat topstitch all the way around the edge of the cushion just finished it off nicely and I couldn’t wait to fill my cushion with it’s innards.

And then I was done! The unpicking and re-stitching made this a bit of an elongated project when it should have taken me much quicker but that’s okay – you live and learn. I think it looks GREAT nestled on my sofa.

As a newbie to the sewing world, I can’t recommend this project highly enough to anyone else wanting to learn. There’s definitely a good reason why it’s the first in Lauren’s book! Next time I make a cushion (which I think I’ll definitely be doing more of!), I’ll pop a few buttonholes down the back to finish the opening off. Ta-da!

LPM Made This: Knitted Baby Cardigan

LPM Made This: Flapjacks for Labour