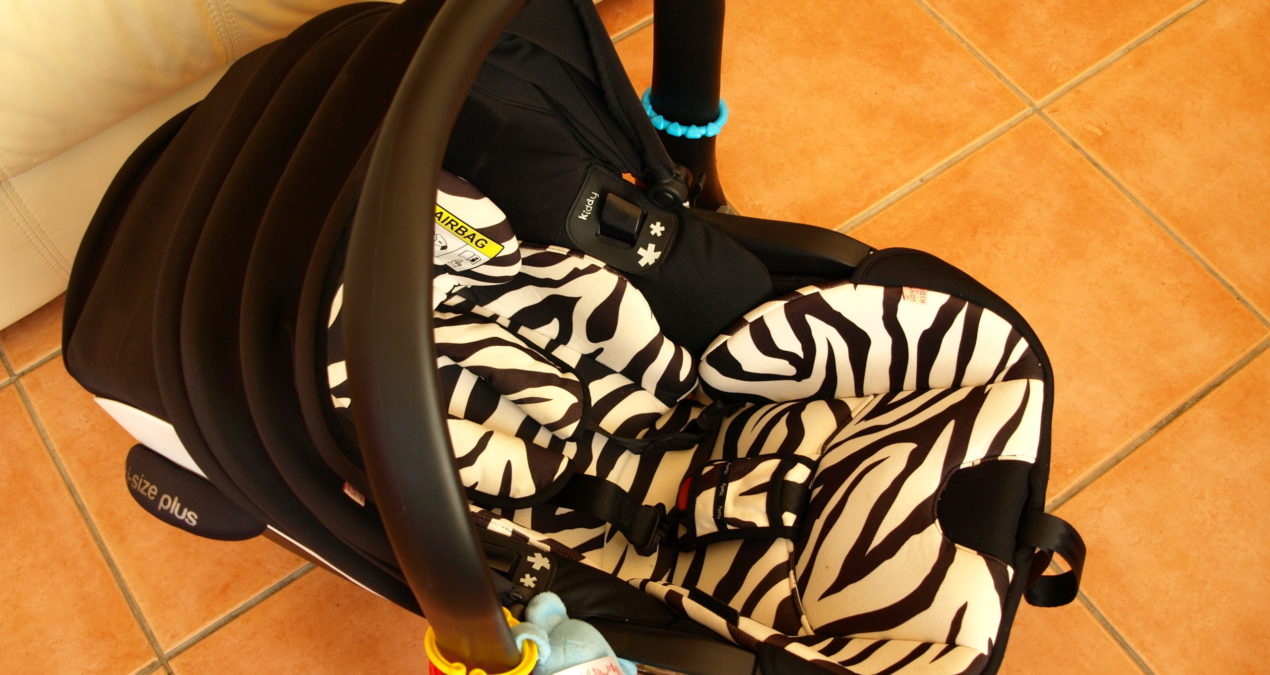 Last week, I heard about the new research that’s been funded by the Lullaby Trust around the risks of taking newborns in car journeys whilst they are sat upright during those first few weeks. I have to confess to not feeling like I’m very well informed when it comes to car seat safety (I’m not sure I feel well informed about anything these days!), but it’s not something I’ve had to really worry about thanks to our Evoluna i-Size infant car seat from Kiddy UK which ticks all the safety boxes for us. Now seems like the perfect time to write up our experience of using it. 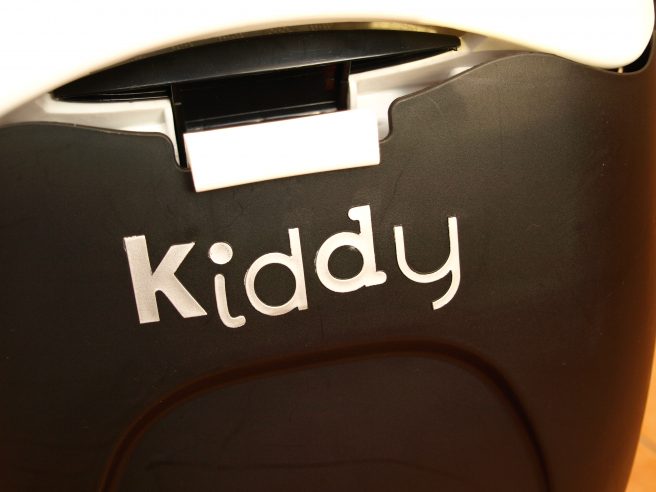 It feels like a lifetime ago that Kiddy UK got in touch about their Evoluna i-Size baby car seat for us to try. They sent us one to use with Pickle and I cannot describe what a joy it has been to use. It probably sounds silly, but I now have so many wonderful memories that are intertwined with this car seat that it’ll be a sad day indeed when Pickle grows too big for it. Luckily, because it’s an i-Size, it should fit him longer than your standard infant carrier and last until he’s around 15 months old so we’ve still got plenty of time before that happens. 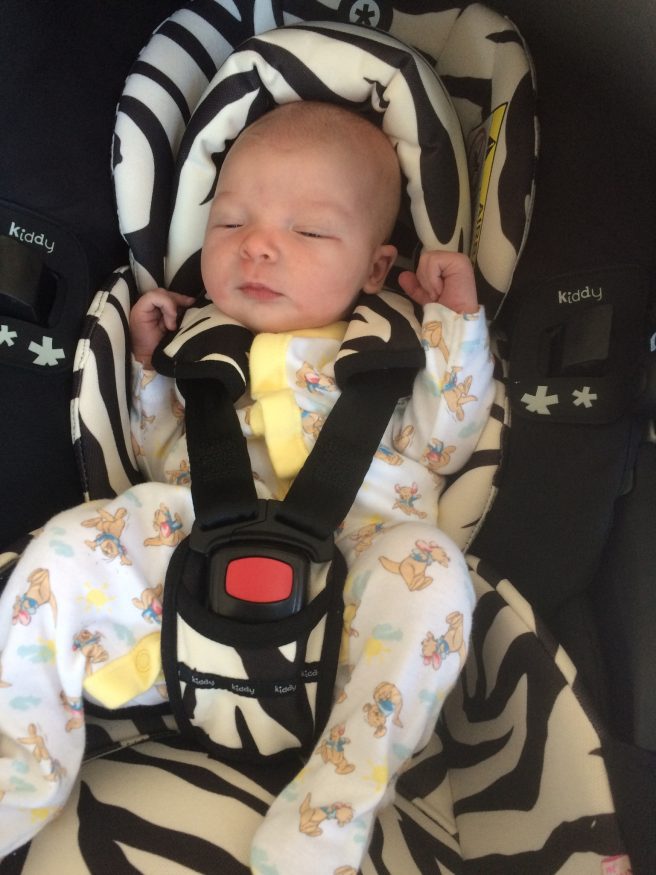 I’ll never forget installing it into the car whilst 9 months pregnant. Trying to figure it all out, with the manual in one hand and a massive bump preventing me from moving the way I wanted and easily reaching the places in the car I needed to was definitely a rite of passage. If I could install it correctly in that physical shape, with pregnancy brain, anyone can do it. Having it in the car, ready for whenever we needed to make a dash to the hospital (ha ha, back in the days I thought it would be a mad dash) was reassuring if somewhat surreal. Trying to figure out how to put him in it when he was only two days old made for another memorable milestone! LPD had fetched it from the car but didn’t bring the manual with him and we couldn’t for the life of us figure out how to lengthen the straps. I had to ask the midwives for help but thankfully, LPD had figured it out in the time it took me to waddle to the nurses station. Wow, everything was so new to us then.

Straight away, my first impressions where how robust and sturdy the seat looked – and so different from the other baby car seats I’d seen. I’m really not surprised it’s been awarded so many safety accolades:

This ultimate in child safety has been proven in independent tests. A prestigious Which? Best Buy was awarded in 2016 after the Evoluna i-Size achieved the highest ever score for a Group 0+ R129 infant carrier. ADAC and Stiftung Warentest also declared the Evoluna i-Size as their test winner (05/2016) and awarded a ‘very good’ quality seal. This is the first ‘very good’ awarded to a child’s car seat since the new stricter testing programme was introduced in 2015. The safety experts also certified that the Evoluna i-Size is especially safe in the event of a frontal or side crash.

You really can’t argue with that, can you? I’d say the only drawback is that all that wonderful protection does come with some weight, so its quite hefty to carry. I had a c-section with Pickle so it was quite a long time before I was able to carry the car seat with him IN it. I could carry the seat, or the baby, but not both. It’s also fairly bulky meaning our passenger seat has to be pulled quite far forward, but a small compromise that you can’t really complain about when the safety of your baby is involved. 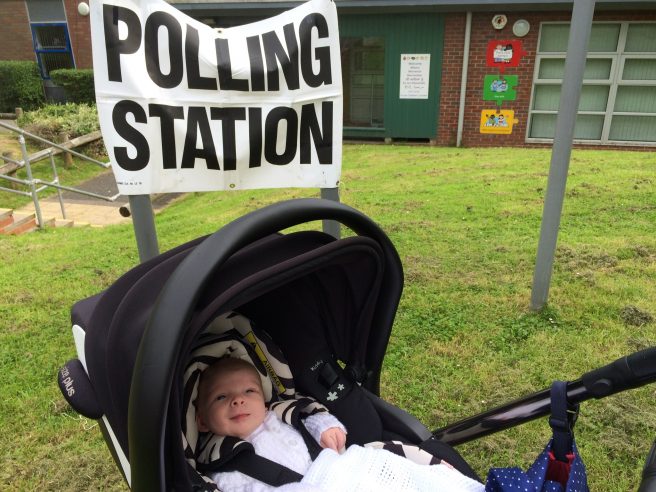 Pickle looks pretty pleased after our walk to our nearby polling station for the EU referendum.

Those first few weeks, even though I couldn’t drive, I used the car seat way more than I would have thought. I tried to walk as much as I could, and with a couple of adapters (which felt expensive at the time but not so expensive now I realise how much I’ve used them), I was able to mount our Evoluna i-Size onto our Mothercare Orb pram base. Pickle MUCH preferred being pushed around in the car seat than the pram bassinet – I think it was just cosier for him, and he liked being held in and ‘snuggled’. It took us quite a long time to transition him into the normal pram. 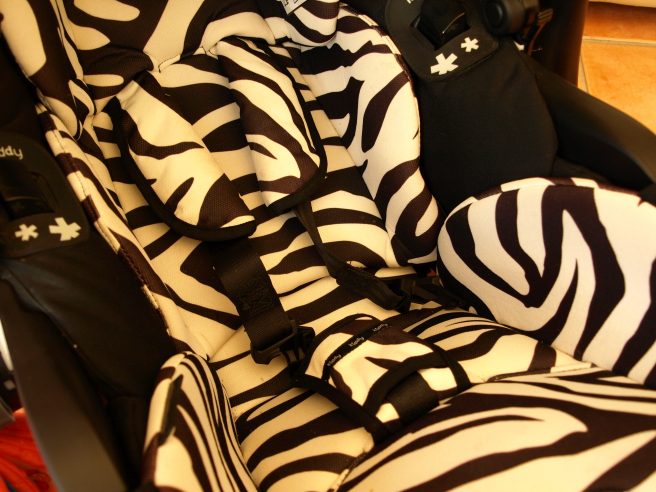 Absolutely LOVING the Zebra print! Totally wouldn’t have thought I’d ever go for such a bright pattern, but I love how unique and quirky it is.

How cool and funky is this design!? It’s available in lots of different colourways to choose from and as I was spoiled for choice, I asked Kiddy UK to send me a surprise and couldn’t be more delighted with the Zebra print we received! I get so many comments on it when I’m out and about and I never have to worry about getting it confused with someone else’s – particularly useful at Cinema Bambino when all the pushchairs are lined up in the buggy park! 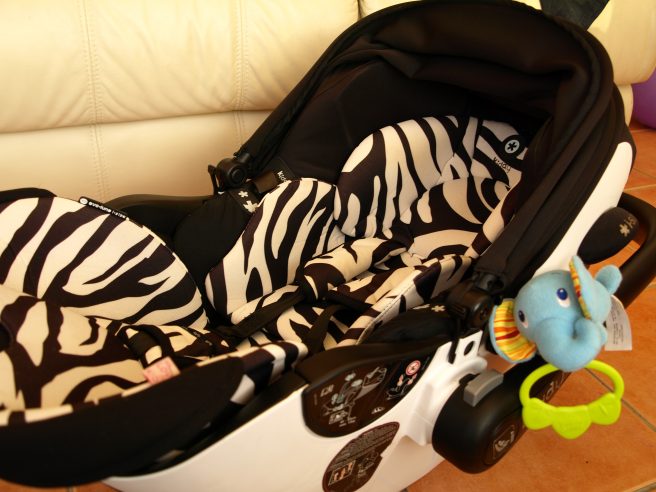 The lie-back function has been an absolute god send.

Without a doubt, my favourite feature of the Evoluna is the lie-back function. This means that I never need to worry about Pickle being in his car seat for too long because it’s perfectly safe for him to be in there for longer when it’s reclined. This was an absolute god send when I drove to West Wales with him when he was only a couple of months old. Even though I broke the journey up with a rest stop in the middle, it still took us over four hours of driving in total – something that I would have worried about with a conventional car seat (especially after the aforementioned recent research, which found that newborn babies sat at a 40° angle were at higher risk of elevated heart rate, respiratory rate and reduced blood oxygen levels in as short a time frame as thirty minutes). 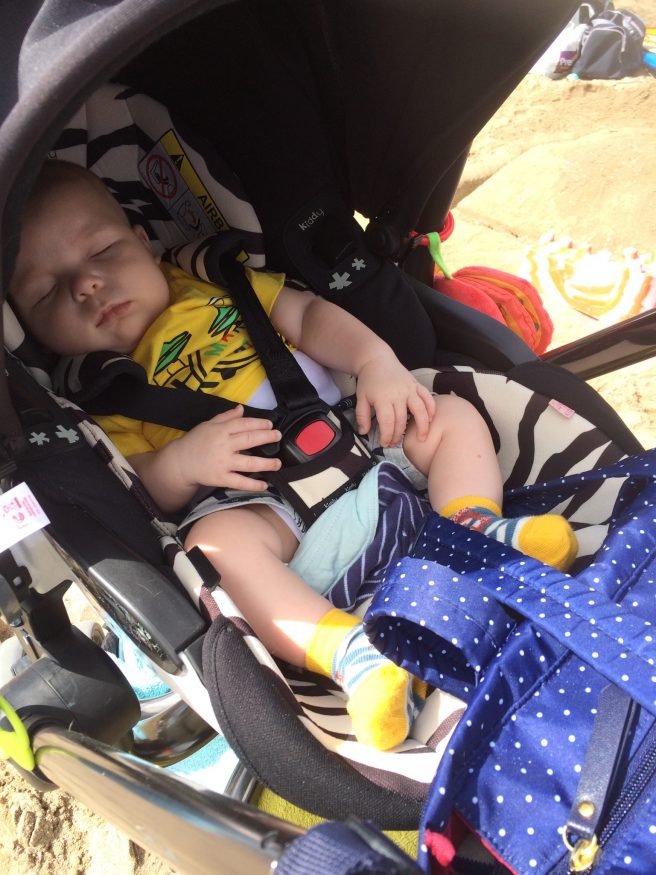 And here’s Pickle fast asleep in Wales… the excitement of visiting the beach for the first time obviously took it’s toll! Incidentally, here you can see just how far the shade cover extends out too – SO crucial for summer babies.

I actually constantly keep the seat reclined in the car now, as with the carry handle pushed back, it makes it much easier to get Pickle in and out of the seat. He’s at that age where he makes himself as stiff as a board whenever you try and strap him in anywhere! They don’t make it easy for us, do they eh? Pesky babies. 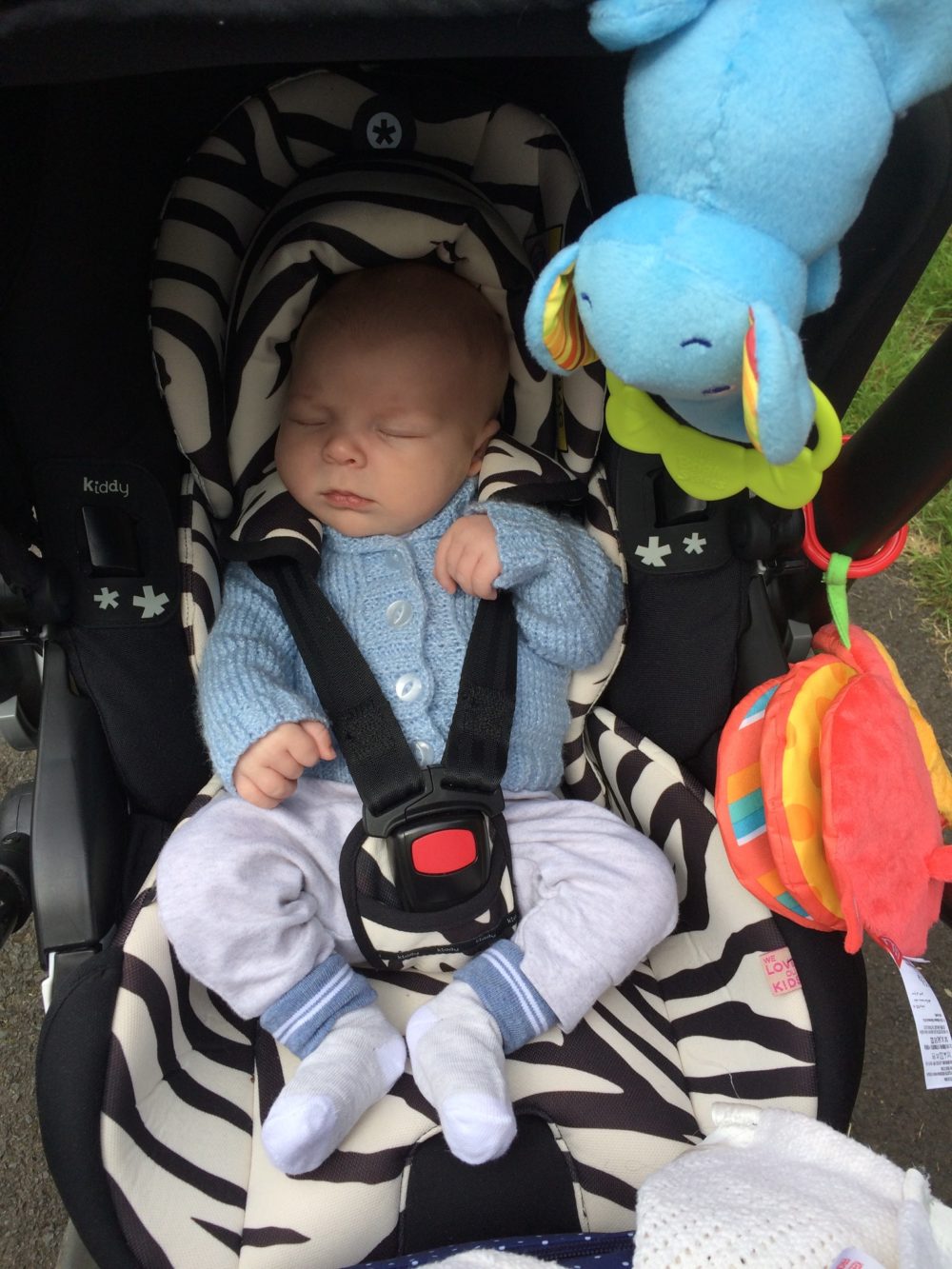 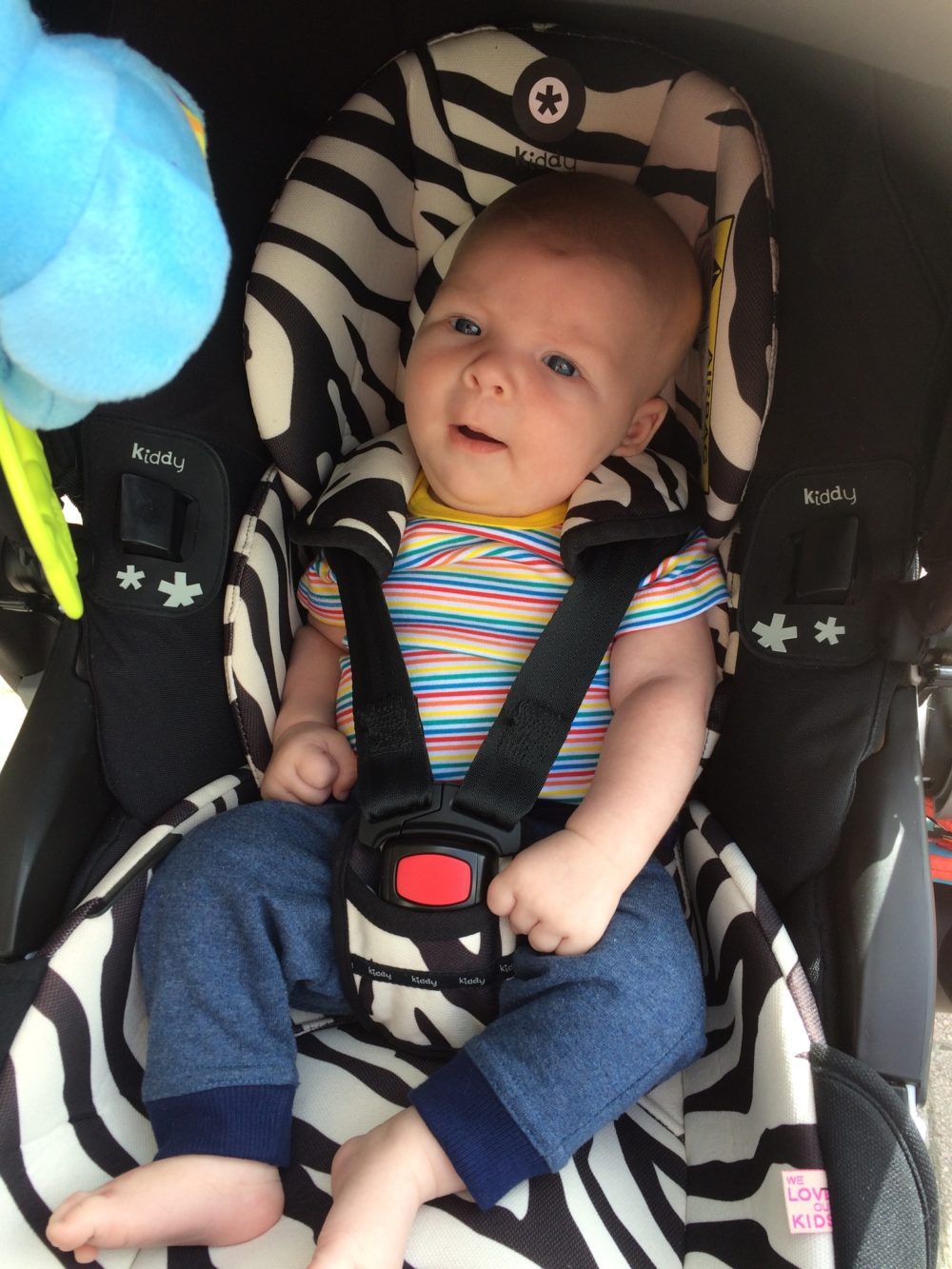 It seems like a lifetime ago that we needed to use the newborn insert (the cushion around Pickle’s head in the left photo). It’s making me feel all nostalgic even looking at it, and proud of how much he’s grown and developed.

I could write about this car seat for much much longer… I could detail all the times I’ve been grateful for the isofix base, thankful for the peace of mind from seeing the correct-installation green lights. I can reminisce about all the places we’ve been, the car journeys where I’ve sang constantly to keep him from crying and the walks around the lake that completely kept me sane those first couple of months. This car seat is more than just a means of transporting our baby. It reminds us how much he’s grown and how strong he is becoming. It symbolises how much we want to protect him, and keep him safe. In the whirlwind of learning how to become parents, this was the one thing we didn’t have to worry about – we knew car safety was sorted. 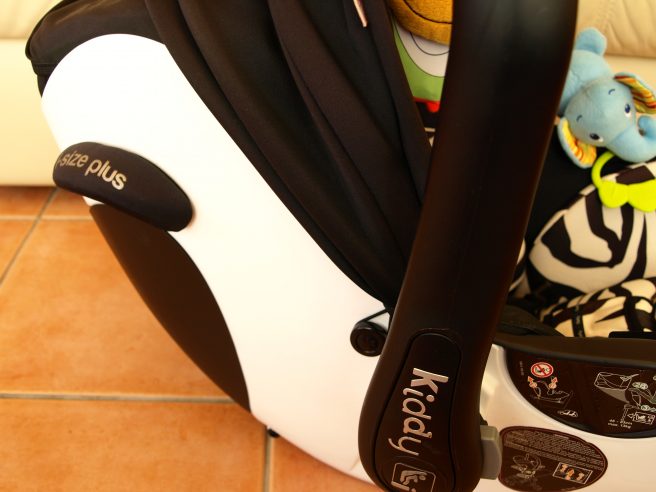 Before we were offered this Evoluna i-Size, we’d already bought a Maxi Cosi Cabriofix seat. We kept it as a back up, but you know what? We’ve NEVER used it. We’ve never needed to. I’ll definitely be sticking to the Kiddy UK seats for the future, and once Pickle does outgrow this one? That might be the time to start thinking about Baby Number Two. Just so I can use it all over again!

Disclaimer: we were kindly sent this car seat and the isofix base for the purpose of this review. All opinions, however, remain my own and as always, are 100% honest.

A Year of Breastfeeding